The shop hours are listed at the Main Page of the Web Site.

Only able to serve the community through donations, Jersey City Free Books has always depended on the kindness of friends.

Students and other serious readers in your community urgently need these books: solid recent fiction and non-fiction, including text books less than three years old. Literary classics are always welcome. Children’s titles and books of all types in languages other than English are great, too.

You can donate quality books at 297 Griffith Street, Jersey City, NJ 07307 during the hours listed at the Main Page of the Web Site.

We can’t take damaged books, encyclopedias or text / computer books more than a couple of years old. Audio or video tapes also can’t be used. We currently can’t accept any more mysteries, thrillers, or Romances. Comic books, graphic novels and some hobby magazines are OK, but in general we cannot take mass market periodicals. Any normal wear and library books are fine. Books with water damage, mildew, missing covers / pages or badly stained will not be accepted. We are not able to pick up books.

Jersey City Free Books operates on the basis of from each according to ability, to each according to need. There is no requirement to donate books. If you have quality books that are not being used — especially those scheduled to be discarded — it would be great if you shared them with others.

Cash donations are not requested and will not be accepted.

Jersey City Free Books provides something to read without cost, obligation, registration or indoctrination; everyone is welcome to take items for reasonable personal use. If you represent a charity or an institution, please communicate that.

Though we are located in Jersey City, there definitely is no residency requirement to receive or to give books.

As books are constantly arriving and then finding new homes, there is no inventory list. Jersey City Free Books cannot reserve, search, hold or send personal alerts concerning a particular title. Books are obtained by visiting the shop and on the basis of first come, first served.

If you have any questions, email JerseyCityFreeBooks@gmail.com email address. 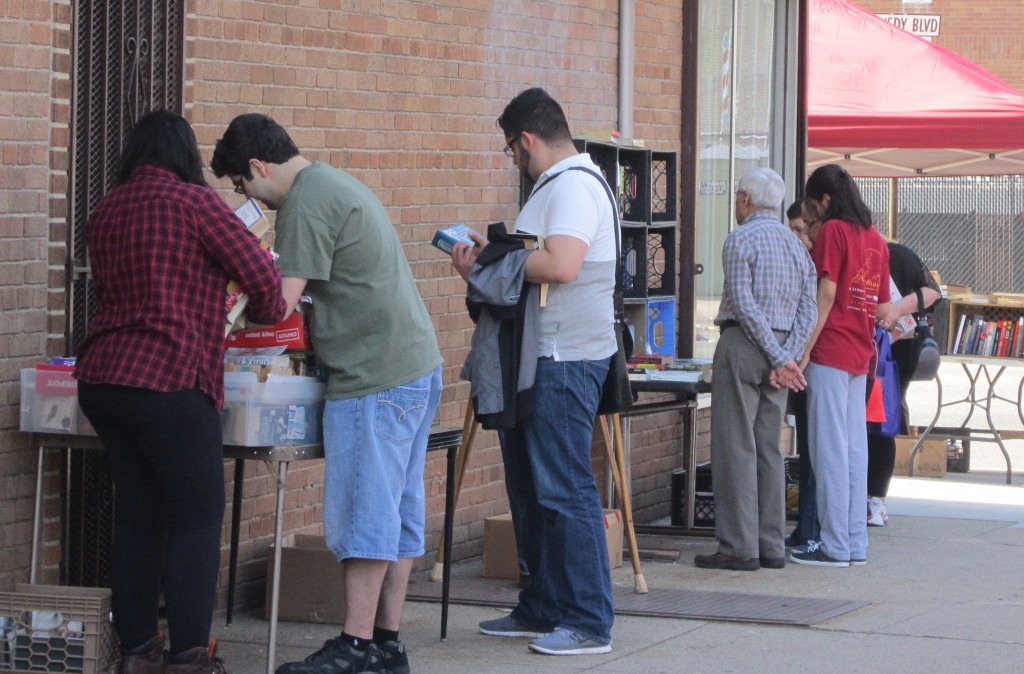 Here at Jersey City Free Books, there are thousands of titles that are waiting for you to open them. Like the tide, hundreds ebb and flow each week. Something I find interesting (And I’ll be the first to admit that I — a riot incited by the then LeRoi Jones — cut my eye teeth on MacBird and was weaned on WFMU — have a particular point of view.) — akin to Sherlock Holmes’s dog barking in the night — are the books that aren’t here.

Norman Mailer — A great author with a career spanning some sixty years, celebrity blending into towering cultural figure and one of the really new practitioners of New Journalism. Besides a stray volume of his political campaign reporting, the ONLY book by Mailer that’s ever graced the shelves of Jersey City Free Books is Harlot’s Ghost (copies of which regularly come and go). This is not only Mailer’s worst book, but it qualifies as one of the worst books ever written. I can only imagine that ol’ Norman had some pressing tax or alimony bill and was by which compelled to clear out every half-baked and rejected short story from his file cabinet by hanging it on a CIA frame.

Yukio Mishima — His influence reverberates through Japanese Culture, World Literature, the Martial Arts, Physical Culture and even World History. Translations were best sellers in the US and the Sailor Who Fell from Grace with the Sea was made into a movie starring Kris Kristofferson and Sarah Miles. Not a single book by Mishima has ever been seen at Jersey City Free Books.

Anthony Burgess — Very popular author, especially in the ’70s, of many books, most importantly A Clockwork Orange — still a strong seller today. No books by Anthony Burgess are now or ever have been at Jersey City Free Books.

Jerzy Kosinski — Another hugely popular figure from the ’70s, one who for a time nipped at Mailer’s New York City celebrity heels. Kosinski wrote (assembled?) Painted Bird, a profound work. He also wrote Being There, a popular book and an even more popular movie. To date at any rate, seek Jerzy Kosinski at Jersey City Free Books and you will not find.

I mentioned the shelves in search of certain authors to someone and she remarked, “Gee, you get to see all the trends.” I do have credentials to prove proficiency in pattern recognition. Actually though, the truth runs closer to Afterword’s John Massett’s observation that, “In your stories, nothing makes any sense. In the old Jersey City, nothing used to make any sense.” In Jersey City PG (PreGentrification), with no place for pretense in the budget, things just were the way they were.

For the Hunger Games internal colonies of rural and inner-city America, incarceration is the peculiar routine. Vast numbers pass through prison, going from little to less opportunity, and then only when life is not shattered or converted completely to crime.

For the many more favored — with concrete walls and steel bars not in city’s centers, but hidden by darkness at the edges — the places of captivity are easy not to see. To ignore suffering is in itself an evil, but if that’s not reason enough, the outcome of nurturing a rot deep within society cannot be good.

Orange Is the New Black — with a light touch — opens the doors of a prison and brings millions inside for a brief visit. The human spirit shines through with the humor, but the situation’s reality is not disguised. And maybe, hopefully, viewers will continue to think at the end of each episode about the Country and the times in which they live.

Jersey City Free Books is proud to supply books for the production of Orange Is the New Black.

Since 2002, the United States has had the highest incarceration rate in the world. Although prison populations are increasing in some parts of the world, the natural rate of incarceration for countries comparable to the United States tends to stay around 100 prisoners per 100,000 population. The U.S. rate is 500 prisoners per 100,000 residents, …
…
… And these men are overwhelmingly young: Incarceration rates are highest for those in their 20s and early 30s. Prisoners also tend to be less educated: The average state prisoner has a 10th grade education, and about 70 percent have not completed high school. Incarceration rates are significantly higher for blacks and Latinos than for whites. In 2010, black men were incarcerated at a rate of 3,074 per 100,000 residents; Latinos were incarcerated at 1,258 per 100,000, and white men were incarcerated at 459 per 100,000. …
…
Blacks, particularly young black males, make up a disproportionate share of the U.S. prison population. In 2008, young black men (ages 18-34) were at least six times more likely to be incarcerated than young white men (see Table 2), according to a recent analysis by Becky Pettit, a University of Washington sociologist.7 She finds that young black males without a high school diploma were more likely to be in prison or jail (37 percent) on any given day in 2008 than to be working (26 percent).
…
Only in the last few decades has the passage into prison of young black men with little schooling emerged as routine. “For these young men, born since the mid-1970s, serving time in prison has become a normal life event,” note Pettit and Bruce Western, a Harvard sociologist.
…
http://www.prb.org/articles/2012/us-incarceration.aspx
# # #