Jersey City Free Books serves the entire community — including those on four legs! We need your help so that we can help both cats and people. Click on this Link for the Amazon Wish List or use the DONATE button. hat’s on the left for a computer screen or click the three horizontal bars if using a smart phone or tablet. Even just dropping off a bag of kitty litter (non-clumping) when the shop is open will mean a lot. If everyone reading this clicked on the DONATE button and gave ONE DOLLAR monthly, we’d be well on the way to providing for suffering cats left to fend for themselves.

Script discovered! – the mashup musical of HAMILTON, CATS and VICTOR/VICTORIA !!!
“Homeless on the Grange”

from: a Jersey City lady who lived in a cat zoo – she had so many cats that she couldn’t afford a new shoe (true)…

to: all cat rescue groups in New York City:
“Re: Homeless cat in possible danger

Last Saturday, I came from my home in New Jersey to attend the re-opening of the Hamilton Grange in St. Nicholas Park on 141st St. After my visit, I decided to take a walk up Hamilton Terrace. At about #**-**, I saw a black cat on the sidewalk who looked in bad shape – very thin, dull matted fur, a bare patch the size of a quarter on his rump, and as I recall, chewed up ears as if from fights. I stopped to offer him some cat food,* but he ignored it and kept walking south. I asked someone passing by if he knew who owned the cat, and he said, “He’s the block cat,” and to the effect, “Everyone knows him. He’s been here for years.”

A few seconds later, as I was wrapping up the food, a couple exited a car and were about to enter the house at – I’m 90% certain – #**, although it was possibly #**. The man approached and asked if I was feeding the cat. I understood him to mean on an ongoing basis, so I said no. He then started to complain about the cat’s existence on the block. I attempted twice to tell him about ACC, the Mayor’s Alliance, the ASPCA etc., but he cut me off, just interested in complaining, not in listening. I got the distinct impression that the couple were newcomers to the block. The man said he didn’t want anybody feeding the cat, in the hope that he would go elsewhere. He also said that when they walk their dog, the cat is (he trailed off, implying that the cat is somehow a problem. I assumed that the dog attempts to chase the cat). I bristled at their selfish attitude and responded that the cat had been there all his life (i.e., in contrast to the couple ). He said something else, then they went in the house, and I went on my way. I remained very upset that these people who have everything were willing to see a creature starve to death because of some minor (imagined?) inconvenience, even when a more humane solution was being proposed.

I fear that they might do something to harm this poor animal, and am writing to all Manhattan rescue groups on the Mayor’s Alliance list to see if someone could trap and possibly find him a home. I imagine he hangs out a lot in the churchyard behind St. Luke’s (corner of 141st and Hamilton Terrace), so perhaps the people there might know of him. Someone must be feeding him if he’s been around so long. I just hope I’m not too late in writing.

*I always carry a “rescue kit” of cat food, water, leash and cotton “cat bag” in my backpack.

p.s. every organization seems overwhelmed with animals waiting for adopters or foster homes. I wonder if there is any current effort to get mandatory spay neuter in NYC. Or for that matter in NJ.”

[Postscript, written June 2016] A Queens cat rescuer responded at the time to the email, advising to take the cat to her vet connection in midtown Manhattan. “Cat’s name?” the vet asked. “We may as well name him Alexander.” We discovered later that he was Alexandra.

Glad some New Yorkers stepped in to help a fellow New Yorker in distress. Bringing a black cat, named after Alexander Hamilton, across the Hudson River and toward the Weehawken bluffs wouldn’t have seemed the most auspicious way to begin the cat’s new life. In the new musical, Alexander/ra Hamilton discovers her true identity, stays in NYC and lives happily ever after. 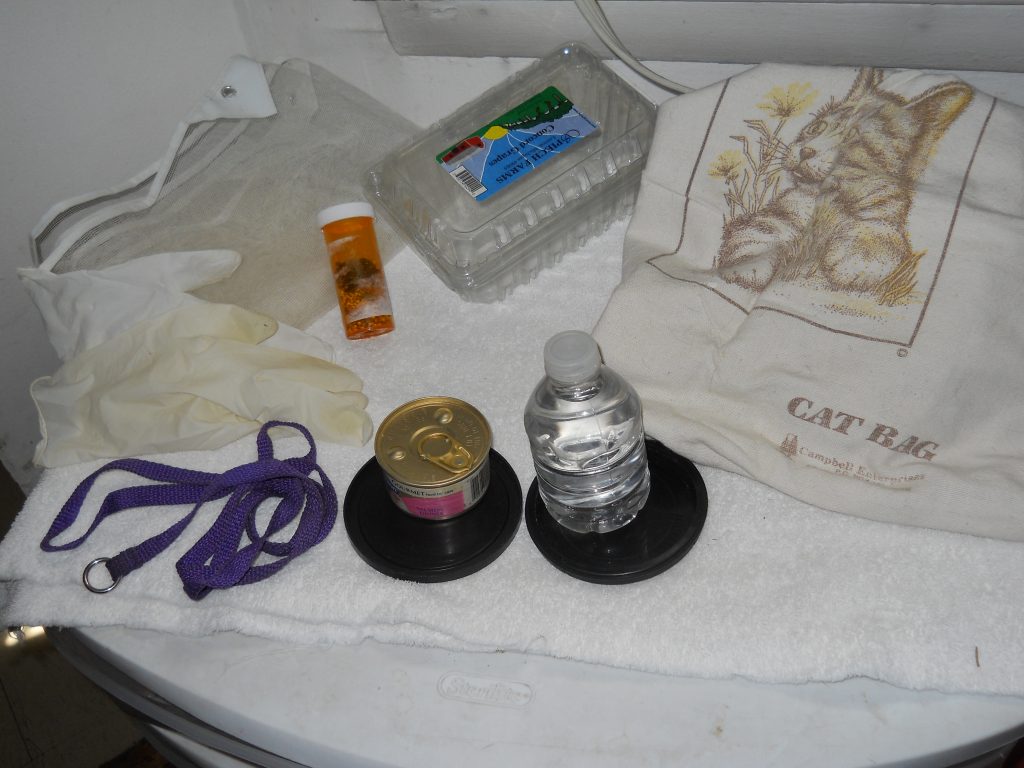