Back in the late-90s, Anthony Olszewski rented a Downtown Jersey City building that for many years had been the location of the political promotions business of Nick Baffa. For over half a century, Baffa had sold buttons, posters, bumper stickers and other graphic weapons to all sides. As might be expected, Nick Baffa was originally a registered Democrat, but he “converted” to Republican at the request of none other than Frank Hague himself.

The structure barely held (overflowing as it were into a series of collapsing sheds in the backyard) a century of hoarded items. Amidst the debris, like flakes of gold nearly hidden by gravel, were examples of the marketing from many of the political campaigns of the Hague and then Kenny machines. The collection contained a case of original, but not mailed Jersey City Garden post cards.

In A Cycle of Power, The Career of Jersey City Mayor Frank Hague, Richard J. Connors, described how John V. Kenny’s anti-Hague organization only was able to rent a single hall for events:
“Kenny also tried, with little success, to line up meeting halls for the spring. He usually found that they were “all booked up” — John Malone had seen to that! A supporter did manage to sign a contract for one hall, the Jersey City Gardens, Saturday nights from January through May.”

For a limited time, these rare printed items are available without cost at Jersey City Free Books, 297 Griffith St. One per person, please do bring an envelope for these delicate actual relics of Jersey City history. 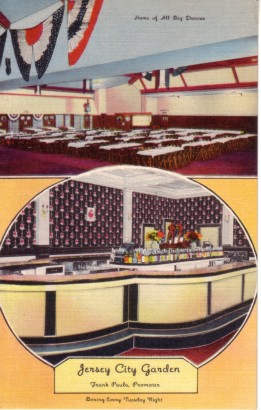